Apologies For The Technical Difficulties (Part 1)

Sorry I have been so neglectful in my blog.
I know. I know. I've been in China for a week and I haven't posted anything! Well, the reason is because I (stupidly) forgot that the Chinese government blocks certain sites. One of those types of sites being blogs. But never fear! I have figured out an alternate way to post so my blog can now stay up to date!

Okay, now to tell you about my adventure in China thus far.

DAY 1
Jet-lag and Culture Shock
When we finally got to the Beijing airport after a total of 14 hours on the plane we were completely exhausted. It was there that the first stages of culture shock began to set in. Even when we were just getting on the plane to Beijing it began to sink in just how different China is from America (obviously, I know). For example, I have always been used to being able to understand what everyone was saying around me. All of a sudden, a majority of the people around me were speaking in Chinese and it hit me how little I understood. So that was the first stage of culture shock for me.
The plane ride was long but bearable. Once we got to Beijing we just followed the crowd to go through customs and get our bags. Then we met our tour guide Richard from China Tours and he whisked us away, into a car and to the hotel.
The rest of the day consisted of my dad and I fighting jet lag to go to bed at a decent time. Beijing time is 12 hours ahead of American and although we landed in Beijing at 4 o'clock in the afternoon, it felt like 4 o'clock in the morning. When 8 o'clock finally rolled around, we decided it was a good time to finally go to bed and prepare for our first day touring China!

DAY 2
The Forbidden City and The Seasons of Beijing
After waking up around 6 the next morning and eating a very delicious breakfast we set off to see two of China's most famous sites, Tiananmen Square the Forbidden City! The weather was nice and the sky was fairly clear and after meeting the rest of our tour group (4 Australians and 3 other Americans) we piled onto the bus and started making our way through Beijing traffic. Turns out Beijing traffic is just as bad, if not worse, than the traffic I have experienced in the States. Except lanes are more like suggestions rather than a strict rule and merging usually entails three cars trying to cram into one lane at the same time. But despite the craziness that is driving in this city, we all arrived to our destination without any problem.
Tiananmen Square was vast, open, and full of tourists from all over. The security presence was blatantly obvious, especially since the anniversary of Tiananmen Square had only been several days earlier. It was interesting being in an area where so much tragedy and controversy has happened but people come to visit the location on vacation.


Then we passed from Tiananmen, under the arch with Mao's portrait, into the Forbidden City. Which was absolutely spectacular. 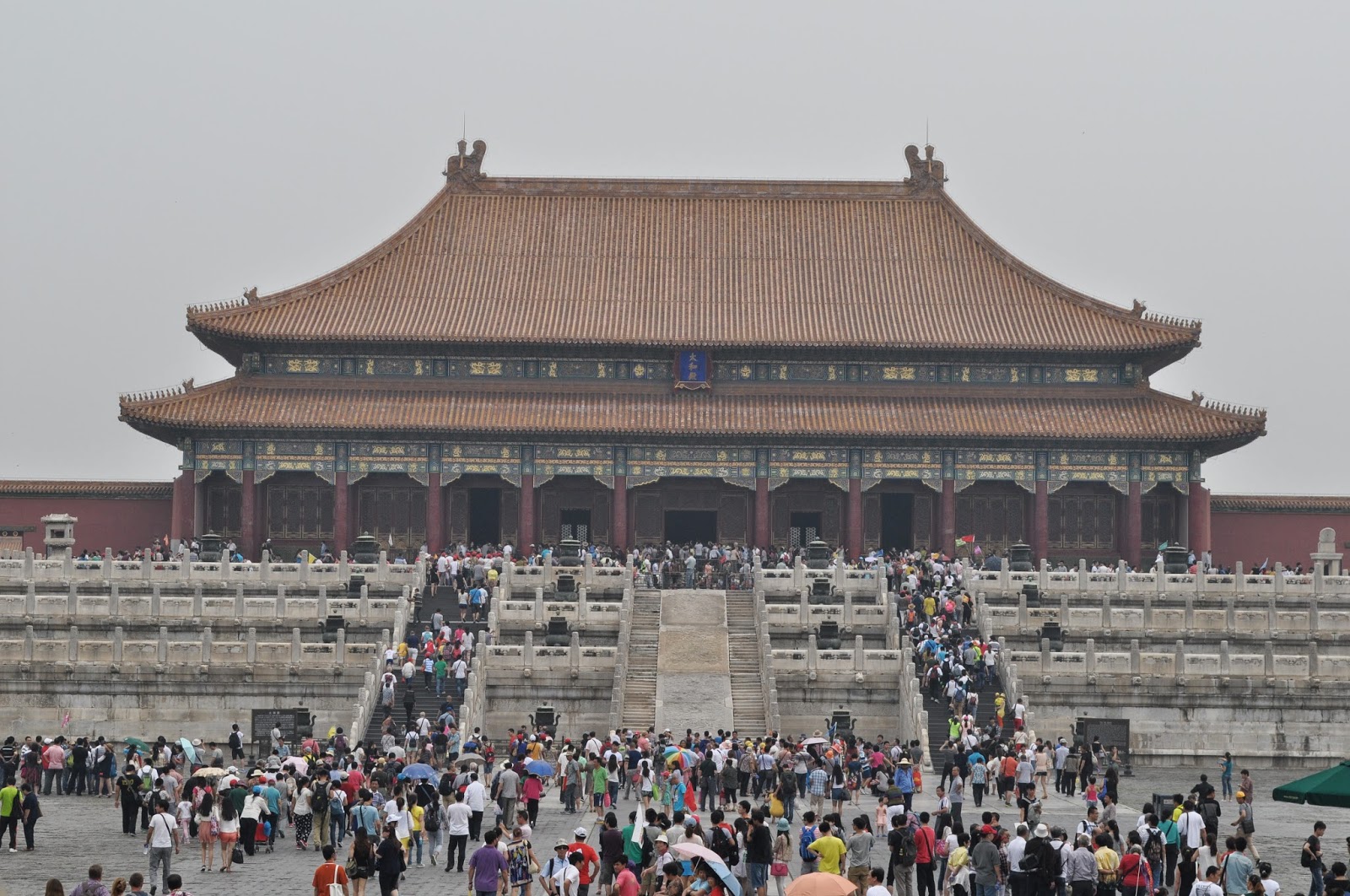 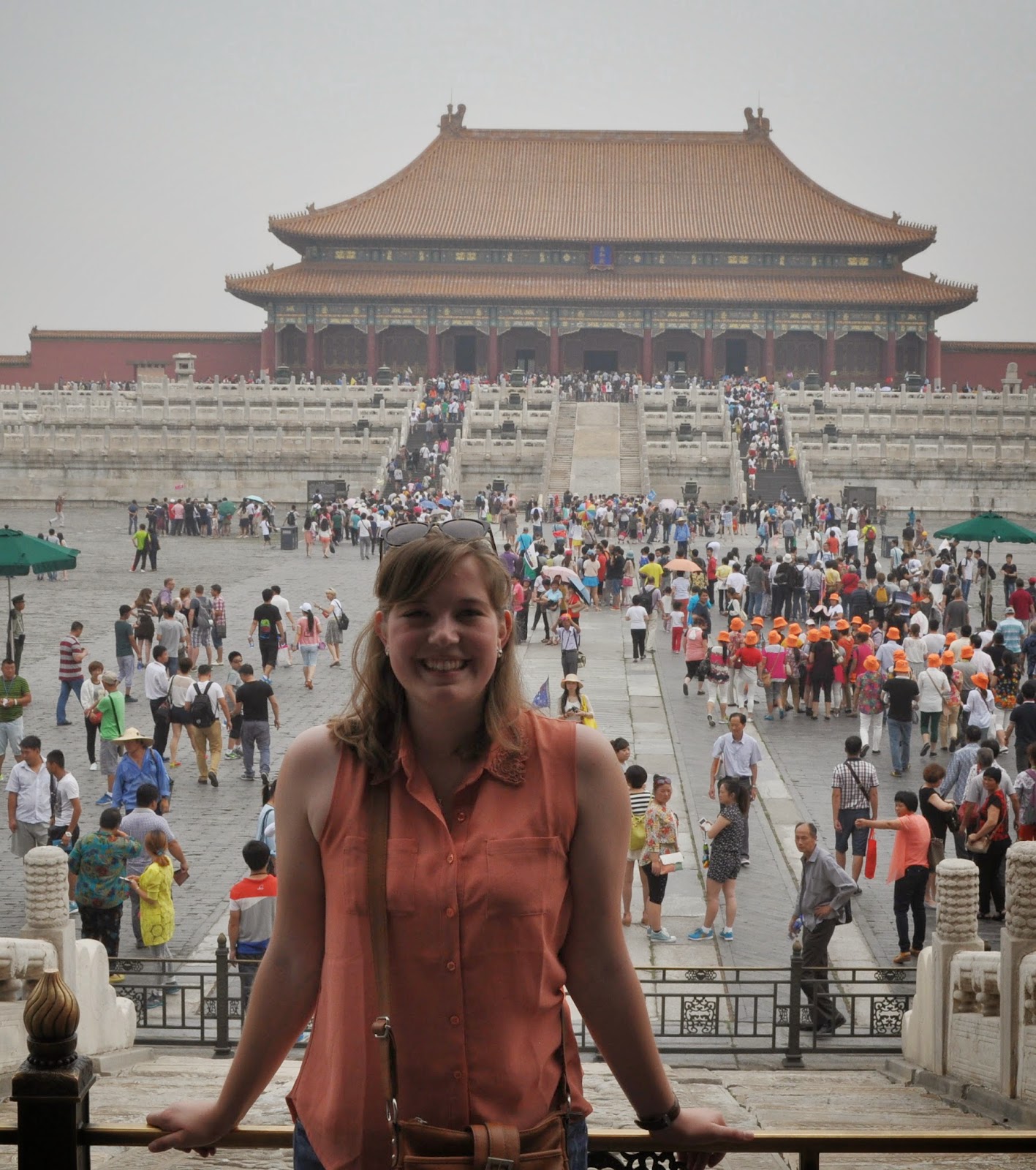 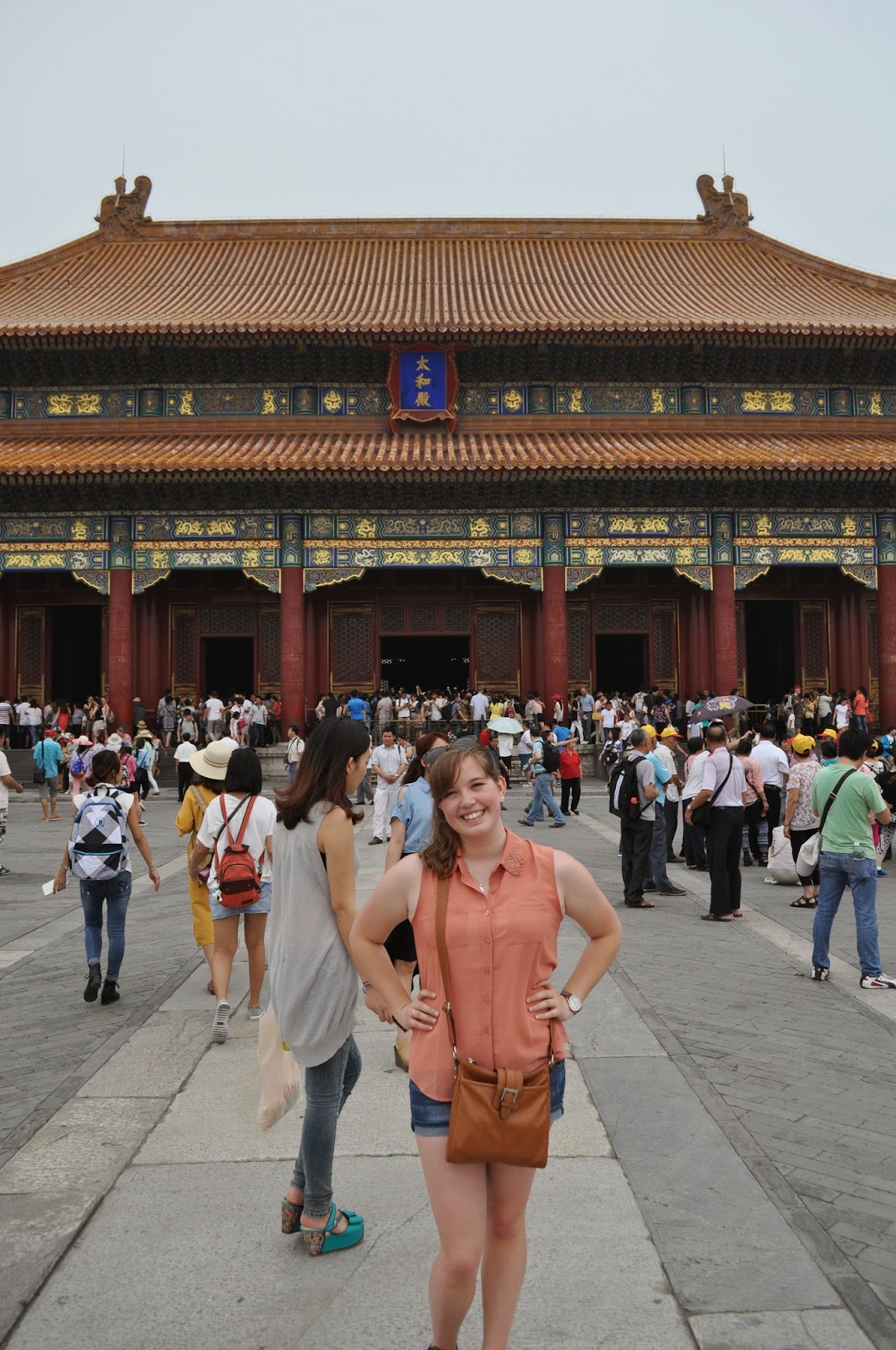 Overall the forbidden city was absolutely amazing and almost surreal to be at. Just seeing the amazing detail and how ornate every structure and walkway was was simply incredible.

We finished the forbidden city just as the sky opened up and unleashed a down pour that was supposed to be unusual in Beijing during this time of the year. So we all rushed for the cover of the bus and headed off to have our first full-blown Chinese meal. I must say it was pretty good. Of course, different from anything I experience in the states but still very satisfactory.

After lunch we went to the Pearl Factory. Here we heard about the Dragon Lady who was a very influential empress that held a lot of power in the dynasty during her time. She used the lake in front of the Summer Palace to breed pearls. Now China has a very impressive export in pearls. And of course, while looking around I had to buy some very cute champagne colored pearls and earrings to match. Plus, the adorable saleswoman made it impossible to say no.

For our last stop we went on to see the Summer Palace and the very same lake that the Dragon Lady used to culture pearls that is still being used today. Unfortunately because the weather was still pretty dreary, most of the group wasn't up to going very far to look closer at the palace but I did have a chance to get some photos. 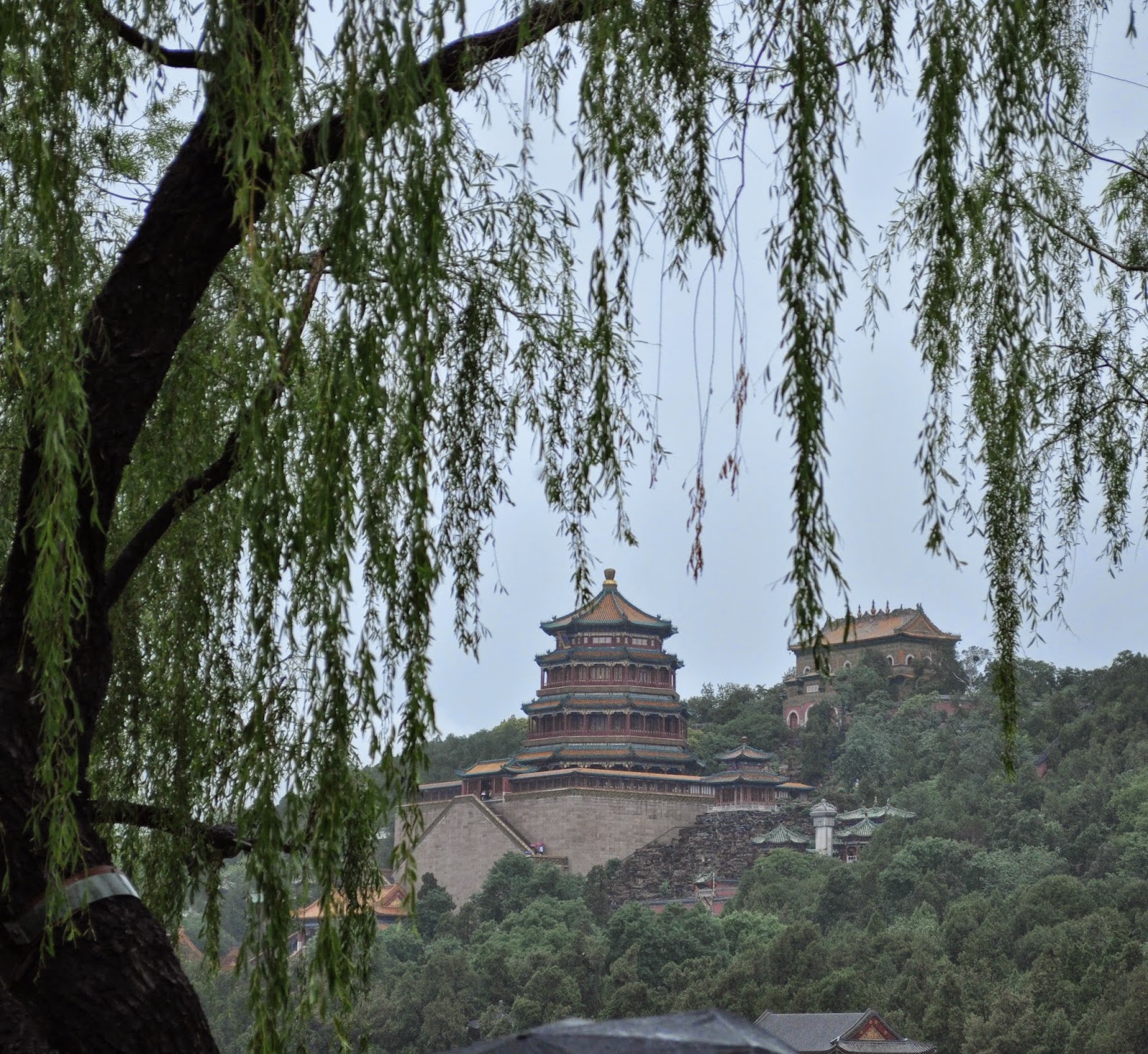 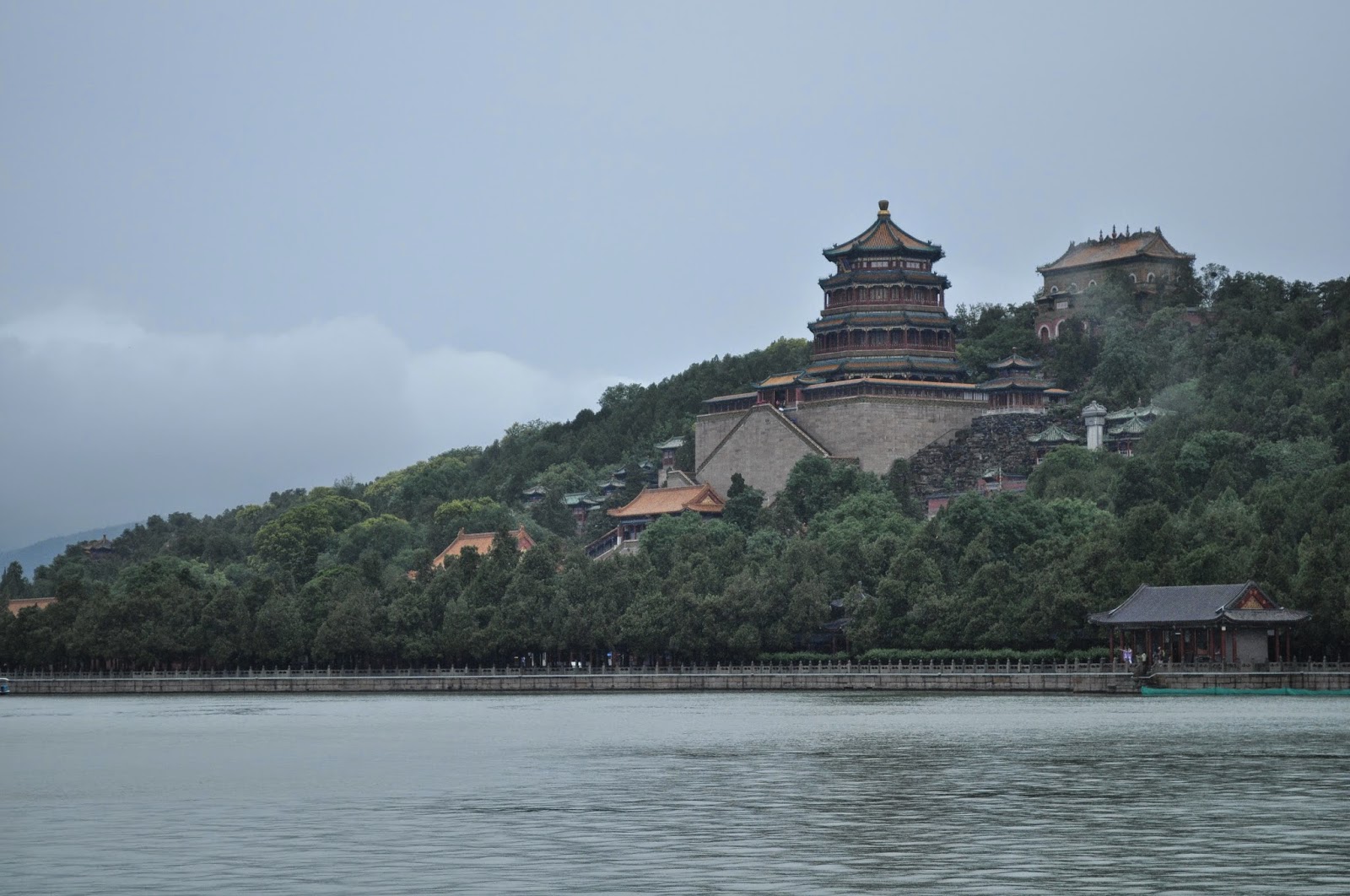 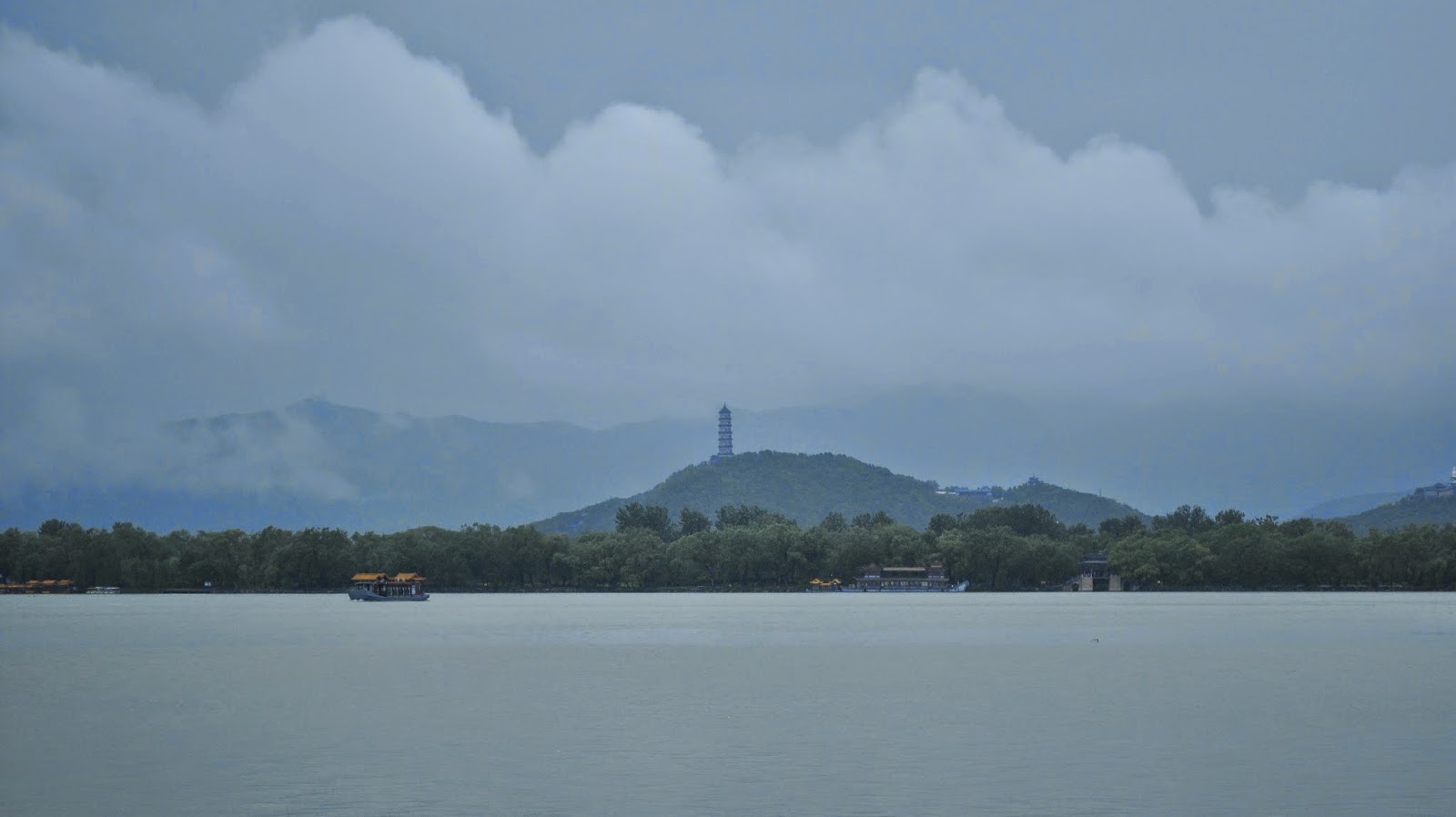 And so ended our first full day in China!

Time for me to go to bed, but I hope to have the second part of the make up post up tomorrow.
Until then!
Catie